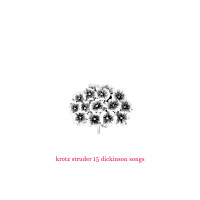 Krotz Struder is the musical solo project of Julien Grandjean, a prolific french singer-songwriter and writer from North-East of France.
His musical work has mostly taken inspiration from litterature. He has sung lyrics from classical poetry of Henri Michaux, William Blake, Robert Walser, Thomas Bernhard, Fernando Pessoa….
He has also published two books of short-stories and some short texts in various literary publications.
« 15 Dickinson songs », an album of 15 songs taken from Emily Dickinson’s poetry is his 19th release to date and his first release ever on a label, after 18 self-releases (in very small quantities) since 2002.